As a local San Rafael Realtor with extensive experience living and working here, I am pleased to present an overview of our city as well as a list of all homes for sale here. San Rafael is Marin’s oldest and largest city, with a population of close to 60,000 people. Established in 1874, it is the seat of the County of Marin and is home to Marin’s second most popular tourist destination (after Muir Woods), the Frank Lloyd Wright Civic Center, pictured below. The building was the last major structure and the only government building designed by the world famous architect. It is now a national historic landmark and hosts one of the country’s best farmers markets each Thursday (seasonal, downtown) and Sunday (year-round).

Named after the Mission San Rafael Archangel, built by Spanish missionaries in 1817, San Rafael is located 11 miles north of San Francisco. The area enjoys some of the best weather in Marin as it is largely free of the coastal fog that areas closer to San Francisco experience. At the city’s heart is its charming, vibrant downtown shopping district which is a mixture of Victorian commercial buildings, ethnic restaurants, street cafes, retail stores, a historic movie theater and numerous music venues, giving San Rafael its hometown flavor.

From Victorians to Eichlers, San Rafael Has It All!

San Rafael offers a wide variety of housing styles at various price points including charming Victorian-style homes in centrally-located Gerstle Park, hillside gated estates with bay views in the Country Club area to the famous mid-century Eichler neighborhoods located further north. San Rafael real estate, like the rest of San Rafael, is diverse and there’s something for everyone.

Parklands and open space account for nearly 30 percent of the city’s land. Since it borders the San Pablo Bay, San Rafael has an abundance of marinas and yacht clubs and many water-oriented recreational activities. Nature lovers will appreciate the quiet beauty of China Camp State Park, a 1,600-acre park where visitors enjoy camping, hiking, boating and wind surfing.

In addition to the wonderful local shops throughout the city, major supermarkets include United Markets, Whole Foods Market, Trader Joe’s, and Safeway. There are also car dealerships, a Home Depot and one of the only Target stores you’ll find anywhere with a water view! And of course there is Northgate Mall, one of the largest in Marin. Also read my new blog article on Le Comptoir French Bistro, a great new restaurant that recently opened in downtown San Rafael.

You may also want to check out the San Rafael neighborhood pages on my website to learn more about these areas of San Rafael: Bret Harte, Country Club, Dominican, Fairhills, Forbes, Gerstle Park and West End. More coming soon! As a San Rafael real estate agent, I would be delighted to help you buy a home in San Rafael.

San Rafael is located in Central Marin and has what some might call a “Goldilocks” climate — not the heat of the north, nor the fog of the south. Click here to see the latest weather for San Rafael.

4th Street in downtown San Rafael has a wide array of dining, entertainment and exercise options. Some of my favorite restaurants include Le Comptoir, Vin Antico, Sol Food, LaVier, Sushi to Dai For and Panama Hotel. From Vietnamese to Italian to French to Fusion, San Rafael has the most diverse dining options in all of Marin County.

Thomas standing in front of one of his favorite San Rafael restaurants, Le Comptoir.

Within San Rafael, there are two school districts: The San Rafael School District (central / southern San Rafael), and the Dixie School District. You may read all about the diverse school options available by reading my Marin Schools Guide. San Rafael is also home to several award-winning private schools, including Brandeis Marin and Marin Academy. Dominican University is also located here, and offers a variety of degree and non-degree programs.

San Rafael is the transportation hub of Marin County. Two major freeways (101 and 580) intersect here, leading north / south and east. The SMART train has two stations in Marin, and work is underway to connect it to the Larkspur ferry terminal. Golden Gate Transit also operates the Bettini Transit Center in downtown San Rafael, which connects all of Marin. The Cal Park Hill Tunnel just re-opened and allows bikers and pedestrians easy access to the Larkspur Ferry from the southern end of San Rafael.

So many hiking options, so little time! A couple of my favorite hikes are the Ridgewood Fire Trail and Gold Hill Fire Trail. There are also some great parks, including McNear’s Beach Park and the China Camp State Park. There are many options for bikers, as well: Download the Marin Bicycle Map here for a list of biking routes.

You name it, San Rafael has it, from Whole Foods to Safeway to Trader Joe’s to highly-acclaimed local options like United Markets and Andy’s Local Markets. Locals also know they can buy specialty items at Cardenas Market, Asian Market and Le Comptoir’s epicerie.

4th Street in downtown San Rafael has a wide array of dining, entertainment and exercise options. Some of my favorite restaurants include Le Comptoir, Vin Antico, Sol Food, LaVier, Sushi to Dai For and Panama Hotel. If you are looking for a gym, there are Body Kinetics, TJ’s Crossfit, and the Jewish Community Center which also has lap swimming. There are many yoga studios including Frequency Yoga and Embrace Yoga. 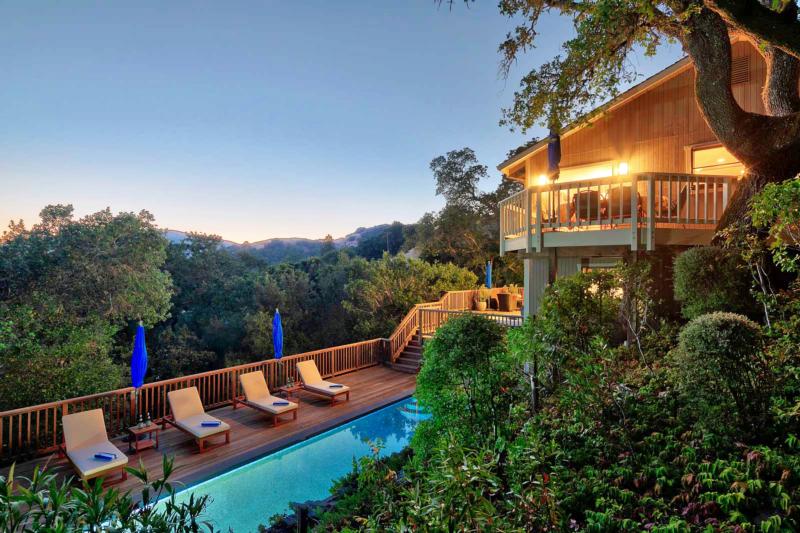